Here’s what we read and watched this past week to stay informed about issues of equity and identity. Resources this week look at corporate diversity programming, the NAACP travel advisory for American Airlines, students voices, and post- #MeToo actions. Plus, an incredible movie on Netflix you won’t want to miss.

This Simple Chart Will Get You To Rethink Your Diversity Program

I think this is a super smart chart with some extremely useful strategies for telling the truth about diversity in our workplaces.

Harassment Is Rampant at Startups, and Few Have Diversity Plans, Study Finds

According to a study published by First Round Capital, half of technology entrepreneurs reported that they have been harassed themselves in the workplace or they know someone who has been harassed. That’s not all that surprising. But what’s disappointing is that these companies don’t seem to be addressing this from an institutional level. Despite all the talk about tech companies getting better at diversity and inclusion, only 17 percent of startups have actually put any kind of formal strategy in place. We think our American Dream Experience – a life size board game that looks at issues of intersectional identity and inequity – would be a great start.

This article made me wonder about why some companies hire diversity consulting groups to begin with. Do they want to do what’s right or what is right for the bottom line?

These students stood up for themselves, peacefully. I admire their fortitude.

The #MeToo Backlash Is Already Here. This Is How We Stop It.

As Melissa Harris-Perry points out in this article, “Feminism” is Merriam Webster’s word of the year. This is no doubt due to the Women’s March last January and the wave of high-profile sexual harassment and assault allegations we’ve been hearing on a near-daily basis since October. This is all good stuff, but where do we go from here? Harris-Perry writes that “individual retribution is not institutional justice.” And she then proposes an incredibly innovative path forward that can lead to meaningful change.

This is one of the best articles I’ve read since the Weinstein story broke last fall.

“Two Mississippi families — one black, one white — confront the brutal realities of prejudice, farming and friendship in a divided World War II era.”

Elections, Shootings, Neverending #MeToo, and More - What We Learned this Week
Each week, we want to share with you what we've learned. Because at Point Made Learning, when it comes to the topics of race,… 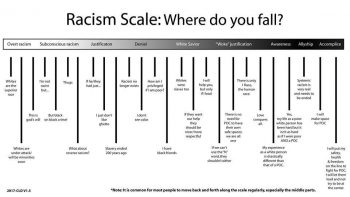 Antiracism Scale, White Supremacy, Radical Copyediting, and Holocaust Forgiveness - What We Learned this Week
We know there are so many resources on the topics of race, identity, antiracism, and equity that trying to stay informed can seem overwhelming.…