Black Students Marched Against Gun Violence in Florida, But You Likely Didn’t Hear About It

Think critically about the ways we look at protest; why #NeverAgain and not #BlackLivesMatter? Why are the organizers of the former lauded as the leaders of a generation while the latter are deemed terrorists? Gun reform must be intersectional. The conversation must include a discussion about race and how gun violence disproportionately affects people of color. And why concern for that violence is only heard in an echo chamber of the folks who regularly experience that violence.

We scorned addicts when they were black. It is different now that they are white.

The American Opioid Crisis has energized legislators and leaders in medicine to detach archaic opinions of morality from the conversation of drug addiction. Instead, they are focused on addiction as a medical condition and have made strides in providing appropriate care for drug dependent individuals, particularly for opioid dependent people. This changing tide in opinion about addiction differs greatly from that of the 1980s and 1990s during the height of America’s crack-cocaine crisis. That crisis primarily affected black people and the response to treating those addictions was to incarcerate and demonize an entire generation of people.

Though the difference in response to each crisis may not surprise some, this article digs into the qualities that make one crisis an issue of health and the other an issue of criminality.

Orientalism Is Alive and Well In American Cinema

Asian and Asian-American representation has only scratched the surface of American media. As characters begin to permeate film and television, we must continue to criticize the way Asian characters are portrayed. Orientalism refers to a colonial or otherwise Western representation of Asian cultures, particularly East Asian and Middle Eastern cultures. Snake charmers, for example, are classic caricatures in the Western

Orientalist lexicon. Suffice it to say, representation begins with authenticity and truth. And in that vein, the author argues that Asian artists should have the agency to tell their own stories without the voices and perspectives of oppressive powers.

[tweetshareinline tweet=”Orientalism surfaces in the New Age commodification of Eastern spirituality, in the predilection to glom separate cultures into a blurry whole…” username=”PM_Learn”]

What can ‘The Simpsons’ do About Apu? A lot, actually.

Similarly, comedian Hari Kondabolu challenges representations of South Asian men, through the lens of The Simpsons character, Apu Nahasapeemapetilon. His documentary, “The Problem With Apu”, unpacks the power of seeing a South Asian character represented for the first time on national television and the subsequent manipulation of that power to further marginalize the community Apu reflects.

“…the creators and writers of “The Simpsons,” like the rest of us, have a responsibility to upgrade and evolve their characters to align with cultural norms of the day. Tokenized stereotypes won’t cut it for an emerging generation that is demanding full and equal representation.” 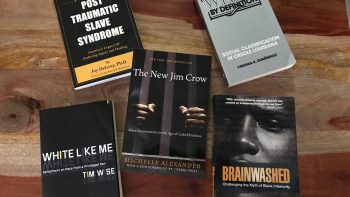 Halloween, Harvey Weinstein, How to Show Up, and More - What We Learned this Week
We say all the time at Point Made Learning that, when it comes to the topics of race, identity, and equity in the U.S.,…

Elections, Shootings, Neverending #MeToo, and More - What We Learned this Week
Each week, we want to share with you what we've learned. Because at Point Made Learning, when it comes to the topics of race,…