The NCAA, 13th Amendment and Other Things We Read About - Point Made Learning
Skip to content

Catch up with Point Made Learning on the visibility of dark-skinned actors in Hollywood, the NCAA’s refusal to pay student athletes, gun reform as a race issue, and two of our favorite novels of the month.

Black Teens Have Been Fighting for Gun Reform for Years

The past weeks have been wrought with political conversations around gun control after the mass shooting of 17 people in Parkland, Florida. In just two weeks, several companies have detached ties from the National Rifle Association (NRA), lawmakers have either amended the minimum age requirement for purchasing a firearm, and Americans have indulged in conversation about mental health and why it is not the principle cause of mass shootings. Students have proven, as they historically have, that young people shift political tides in the United States. From the Civil Rights Movement to Occupy Wall Street, young people consistently stand on the front lines of protest. But what do the people who incite change look like? This article looks at the way we interpret protests based on the people who lead and organize them. It asks, “why #NeverAgain and not #BlackLivesMatter?”

The National Collegiate Athletic Association (NCAA) is one of the most successful sports organizations in the country, generating billions of dollars from nationally televised sports competitions, primarily basketball and football. But despite its massive financial success the NCAA refuses to pay student athletes. It’s no secret that a majority of the athletes who play at the advanced, collegiate level are men of color and that a majority of students who play sports at Division 1 colleges receive scholarships in “exchange” for their participation. And while scholarships cover tuition, room, board, and other basic expenses, it does not compensate for the professional level of play and responsibility athletes are required to meet. But the NCAA does not see the merit in appropriately compensating “their” athletes.

“It is, in essence, admitting that student-athletes are working as slave laborers and, as such, do not deserve fair compensation.” – Shaun King

Colorism is one of white colonialism’s most insidious and effective tools of marginalization. It pervades our colloquial understanding of racism and thusly acts as a silent agent of oppression. But it exists all around us, particularly in pop culture. People of color have always raised concerns about representation on screen but those concerns are more than skin deep. Colorism values lighter skin over darker skin as it indicates proximity to whiteness, so when a light-skinned, biracial person is contending for a role that is uniquely African and dark-skinned, one must ask the question, is my skin not good enough? Amandla Sternberg takes on this conversation with a great deal of grace.

When They Call You a Terrorist: a Black Lives Matter Memoir by Patrisse Khan-Cullors and Asha Bandele

From Darius Moore: I didn’t plan to choose this book when I went to the Amazon Bookstore. Initially, I wanted to purchase some work by Roxanne Gay and finally read Beloved by our beloved, Toni Morrison. This book caught me on my way to the register. It seemed like an obvious choice as a member of the Point Made Learning team but also because the #BlackLivesMatter movement shifted my perspective of what justice 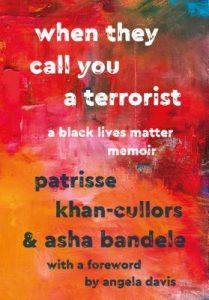 looked like and what pursuing justice looked like. Khan-Cullors’s memoir does more than explain the origins of #BlackLivesMatter. It confronts the reasons we even have to tell the world that Black Lives Matter. When They Call You a Terrorist… is a story of triumph. It is a story about love and what it can do to heal communities — a testimony. I implore everyone to read it, regardless of your political affiliations.

The Hate U Give by Angie Thomas

From Nelly Gargano: In her debut novel, Angie Thomas tells an all too familiar story of police brutality and American identity through her protagonist’s authentically complicated experience. This novel will challenge 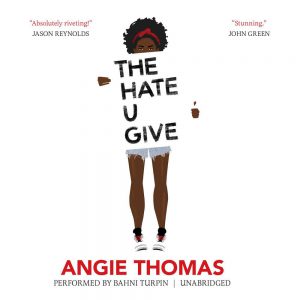 readers to consider their own responsibility in establishing an equitable and just America. And Amandla Sternberg, mentioned above, will star in the film version of the novel.