Antiracism Programming: Vassar Vassar Brings In I'm Not Racist... Am I? Package for First-Year Orientation
Skip to content

Since the release of our documentary film I’m Not Racist… Am I? (INRAI), Point Made Learning (PML) has held more than 400 screenings and workshops across the United States. This antiracism programming engages diverse audiences and helps communities think, learn, and talk, about race and racism in ways they don’t often get a chance to do.

We’ve now developed an additional tool for deepening understanding of the film’s content: The I’m Not Racist… Am I? Digital Experience). Vassar College is one of the first institutions to license our online course as part of the their INRAI package. Keep reading to learn about how they used the course, the film, and our workshops for a comprehensive first-year orientation program. And send us an email if you’d like to do something similar at your school or organization: programming@pointmade.com

Starting off the 2017 fall semester, several members of Vassar College’s faculty and administration wanted to take the university’s programming on diversity, equity and inclusion to the next level. Vassar already considered itself a progressive institution. But recent race-related issues on campus had highlighted a need for more work on these topics.

Enter I’m Not Racist… Am I?, Point Made Learning’s documentary film and new INRAI Digital Online Course, which Vassar used this October to engage its entire first-year class. Coordinating with several Vassar departments, we coached faculty and administration members on how to facilitate discussions of the film.

Then, we screened the film three separate times for the school’s first-year students. After each screening, we led group Q&A sessions, followed by smaller discussion groups facilitated by Vassar staff. In all, our workshops reached more than 600 students and educators — and they made a lasting impact on campus.

An article in the Vassar Miscellany News described the decision to bring I’m Not Racist… Am I? to the first-years as “a significant move by the administration.” It fostered discussion and helped deepen the student body’s understanding of racism in an effective, inclusive way.

“Because we realized that our students wanted to continue that conversation.”

Vassar conducts a first-year Orientation program which includes a diversity component each year. “This year, we decided to supplement that with this film,” said Associate Dean for Campus Life and Diversity Edward Pittman. “Because we realized that our students wanted to continue that conversation and have more opportunities to explore issues around race, gender, and other identities.”

“We had a large number of students who said, ‘This is great, we need to do more of this.’” Pittman added. “For us, it meant that our students are thinking, were engaged. And that’s exactly what you want a program like this to do — open up dialogue.”

Pittman and Associate Professor and Chair of Drama Shona Tucker and Associate Film Professor Mia Mask, (and other faculty and school departments who came on board) helped bring the film to Vassar. The idea to host the screenings originated when Tucker saw clips from the film at her son’s school and thought Vassar could use the content, too.

What resources would you bring to your college campus to address issues of race in the community?

“Seeing the responses of the parents and the teachers who were there at my son’s school — and hearing the responses from my 11-year-old — it really hit me in poignant ways,” Tucker said. “So I thought, ‘This would really go well at Vassar,’ because Vassar had been having some serious racial disturbances on campus. So I started talking to Mia (Mask), and the deans, and anybody who would listen, really, saying, ‘We ought to bring this to Vassar College.’”

“We felt we needed a trial run with students,” she said, “so we did a screening for 30 students from all different backgrounds, and the students were, ‘Yeah, yeah, yeah — this film should be shown!’ And then the discussion was, ‘when should it be shown, and to whom,’ and it was decided that freshman would be the ideal start.”

The planning team chose first-years as their target audience because the film screenings could tie in to the existing Orientation programming. They also wanted to reach first-years because, as the newest students on campus — many of them may be inexperienced in dealing with these issues. And they have four years ahead of them for continued education and exploration.

It took the planning committee almost two years to make the screenings a reality. First, they had to clear the hurdles of administrative and financial red tape. Once they got through that, however, they agreed the effort was worth it.

“I was surprised it went so smoothly”

“I was surprised that it went so smoothly,” said Mask. “All of our screenings, our post-screening discussions, all of the breakout groups — all of that went as planned, and we were delighted.”

“After the film, so many students were standing up and offering honest, open revelations about their experience,” she said. “And we were really happy to see that. It’s been two years in the planning. It took so much to bring it to fruition, and it all just went off so well. For the vast majority of students, my sense is that this can be a positive catalyst for change.”

“It opened up a channel of conversation”

One student who attended the screenings, Chloe Crawford, agreed. “My group of friends, we’ve been having race-related discussions at lunches and dinners the past few weeks, and that’s because of the film,” she said. “My friend group is fairly white, except for myself and two other people of color. I think it’s great, honestly, that as a group we can have these discussions … I think it opened up a channel of conversation amongst us.”

For Crawford, this was an important starting point for what she hopes will be an ongoing discussion that she and her classmates will have the rest of their college careers. And into their adult lives. One thing she emphasized was the film’s ability to create a safe space for people of color to come forward with thoughts and feelings that they may have shied away from expressing in the past.

“After the film, so many students were standing up and offering open, honest revelations about their experience. For the vast majority of students, my sense is that this can be a positive catalyst for change.”

“I think that the discussions afterwards facilitated by staff members seemed to allow for some of the people of color on campus to finally be able to speak in front of white students,” she said, “and not be seen that they were in the wrong, or be perceived that they were over-emotional or aggressive. So I thought that was empowering.”

In the future, Crawford suggested that Vassar consider showing the film to all students. Pittman acknowledged that’s something that’s already on their radar.

“Next semester, we’re thinking of showing I’m Not Racist… Am I? to sophomores, juniors, and seniors,” he said, “because they heard about the freshmen seeing it, and they said, ‘Why don’t we get to see it?’”

In our interviews with Tucker, Mask, Pittman and Crawford, we discussed the steps they went through to actually make these screenings happen. Here are some of the highlights from our Q&A’s.

PML: You used our I’m Not Racist… Am I? Digital Online Course to introduce faculty to the film and prep them for facilitating discussions with the students. How was your experience with our online learning modules?

PML: What advice do you have for other people who want to hold similar events? Say, your top 3 tips …

“Two: The pilot program was not a bad idea, but know who you’re going to show it to.

“Three: Be prepared to have several follow-up conversations — not just immediately afterwards, but weeks afterwards as well to learn more about what’s happening.”

“Two: Build a community of folks who want to work on this project with you — a good planning group or committee, that’s very important.

“Three: Make sure to follow up and follow through, because this film can be a great catalyst for change if you do your follow-up work.”

PML: Did our programming meet your objectives?

“The other day, a student emailed me saying, ‘I want to meet with you to discuss the movie.’ And we met and talked about a question he had that he had been discussing with one of his friends. That’s indicative of what’s out there. I know that the students are ruminating on the content of the movie, and that’s what we wanted to happen.”

“Whether people like the film or not, it creates discussion.”

PML: What’s the value of I’m Not Racist… Am I? And would you recommend that other universities and organizations screen it?

“It raised a lot of questions for our students”

PML: What do you see as the long-term impact of this programming, and how does it fit into your overall strategy?

PML: Why is hosting events like this one important? Why did you do it?

Bring INRAI to Your Institution

If you are interested in hosting a Point Made Learning film screening or workshop, please send us an email: programming@pointmade.com

Also, check out our new I’m Not Racist… Am I? Digital Online Course — a valuable program for corporations and individuals who want to Look Deeper into race, racism, and bias.

About Point Made Learning 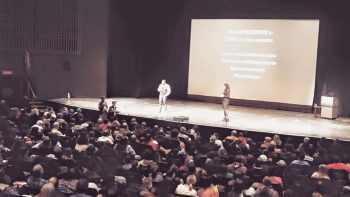 Screening Organizing 101: I'm Not Racist... Am I? at The Ohio State University
Since the release of the documentary film I’m Not Racist… Am I?, Point Made Learning (PML) has held more than 400 screenings and workshops…

Screening Organizing 101: I'm Not Racist... Am I? Comes to Des Moines, Iowa
Since the release of the documentary film I’m Not Racist… Am I?, Point Made Learning (PML) has held more than 400 screenings and workshops…