Race-Based Legislation, Implicit Bias Testing and Criminalizing Debt: What We Read This Week - Point Made Learning
Skip to content

Here are some interesting things we read this week about race and equity in the United States.

“‘Resist White Supremacy’: A sign. A farm. And the fury that followed.”

Cox Farms has a history of practicing free speech through their business, a practice that has elicited controversy for the owners’ family. Their recent poster, as detailed in the article’s title, stirred their Northern Virginia town into a frenzy. Aaron 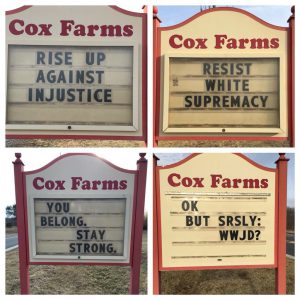 Cox-Leow, daughter of the farm’s owner, expressed that, “when it comes to speaking out against systems of oppression and injustice, wwe see it as our moral responsibility to se our position of privilege and power… to engage visibly and actively in the fight for justice.”

Microaggressive behaviors reflect the ways we, as a society, have been conditioned to respond to specific demographics. For example, clutching one’s purse when a person of color enters an empty elevator is a response to our conditioned understanding of men of color as inherently criminal. Implicit bias tests seek to exploit those conditioned responses and use them to uncover our own biases, regardless of gender, race, and other intersections of our identity.

From Barb Lee: “Go, Baptists!  If I had not heard this “sermon” myself, I would not have believed that this happened in a Baptist Church in Oklahoma. Bam! Caught in my own biases again. This video is incredible for those of us who grew up in white Southern Baptist churches. This makes me hopeful.”

“ South Carolina Lawmakers Want to Ban Baggy Pants Because What Other Political Issue Could Possibly Be More Pressing?”

The title speaks for itself. In an effort to further police people of color, politicians in South Carolina plan to criminalize sagging pants, overlooking the racially loaded implications of instituting such a law. It is a boldface attempt to criminalize citizens based explicitly on their race, though politicians from the area would like to convince us that the law will affect people across races.

“A Pound of Flesh: The Criminalization of Private Debt”

From the ACLU: “Arrests stemming from private debt are devastating communities across the country, and amount to a silent financial crisis that, due to longstanding racial and economic inequalities, is disproportionately affecting people of color and low-income communities.” Attached is the full report conducted by the ACLU. Read this article for a synopsis of the report.

Corporate Diversity Programs, Student Protest, and Post- #MeToo - What We Learned this Week
Here's what we read and watched this past week to stay informed about issues of equity and identity. Resources this week look at corporate…

Bias and Racism: Let's Talk About What's Brewing
POINT MADE LEARNING DECLARES THE IMPLICIT BIAS CONVERSATION ESSENTIAL FOR EVERYONE, #NOTJUSTSTARBUCKS Point Made Learning asks all communities to talk about bias and racism…

The NCAA, 13th Amendment and Other Things We Read About
Catch up with Point Made Learning on the visibility of dark-skinned actors in Hollywood, the NCAA's refusal to pay student athletes, gun reform as…